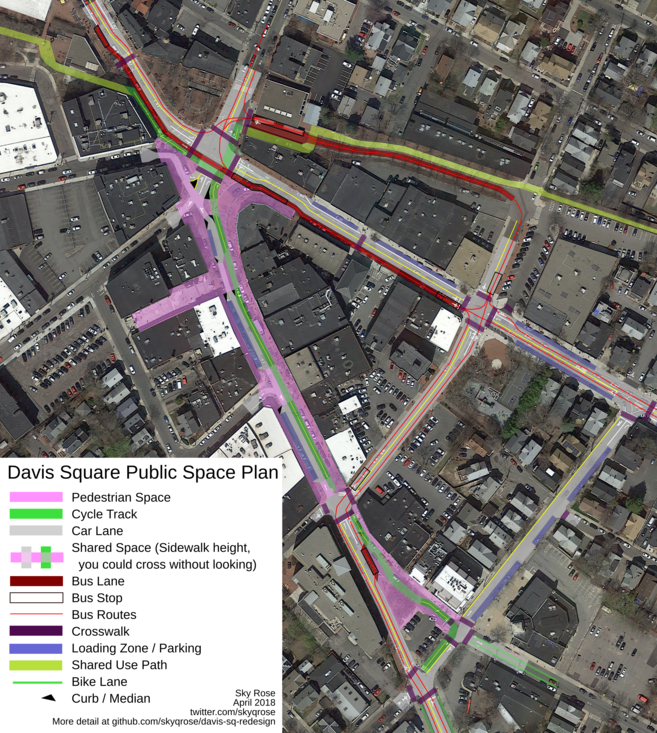 This is a hypothetical map of Davis Square if space that’s currently taken by cars was reallocated to walkers, bikers, and transit takers instead.

Some features of this plan:

All 6 bus routes that use the square move to highland instead of Elm. The splat will become slower for cars, so buses get a dedicated lane through that congestion. Consider the bus lane and the off-street bus-only zone as opposite directions of a single two-way street.

The routes become much straighter in this plan. The 96 and 87 can use Grove instead of zig zagging on Cutter and Highland, and the 94, 89, and 90, which terminate at Davis, have a much smaller loop. This, combined with the benefits of the bus lane, means that routes will be faster, more reliable, and cheaper to operate.

Losing bus access on Elm St is unfortunate, but it would be difficult to have efficient bus access while keeping Elm St drivers slow and giving space to pedestrians. The new bus stops at Grove/Elm and the major hub (with all 6 bus routes) inside the Splat will be a longer walking distance from the center of Elm St than today’s stop, but the walk will be more comfortable and the buses will have better service. It’s a tradeoff.

Questions for improving the design

It was inspired by this Twitter post. Discussions about a previous version are on Twitter and DreamWidth The previous version removed all cars from Elm St, but received pushback, so this version imagines Elm St having local car access.